ART in the Family

Australia is a country which has a cultural heritage built on dreams.

Both traditionally and from our indigenous ancestors, dreams have been passed through stories and artwork that talk to us about: beginnings, hopes, opportunities, rituals, discovery and the rich fabric of life. Each time a dream is passed it is used to capture and depict the passing of our cultural heritage from one generation to the next.

Ultimate Art Current Exhibition is tilted “ART in the Family” is a representation of Australian Contemporary Art featuring both the Herman and Pekel Artists and the Utopia indigenous community featuring the Pwerle and Petyarre Artists.

Artists in the family often inspire the next generation whether they are from a contemporary or indigenous background. From childhood, they are exposed to artworks on the walls in the studio, art materials and art books, family visits to galleries and simply by living in a creative environment surrounded by their father and or/mother’s artistic peers who gather to discuss art.

The European painting traditions upon which Sali Herman style had been both developed and established in his works and he was able to cast new eyes over the Australian landscape.

Sali found inspiration in the Australian urban environment by revealing beauty in the inner-city, especially Paddington. Here he helped to raise awareness of the significance of this part of Sydney.

Sali Herman’s observations of his surroundings enabled him to translate the essence of a scene through the use of muted colours and tactile surfaces. His reputation was forged through exhibitions and winning the Wynne Prize on four occasions and the Sulman twice.

Ted Herman pursued his own career in painting holding his first solo exhibition at the Terry Clune Gallery, Potts point in 1958, at the same time one of his landscapes was hung in the Wynn Prize exhibition.

These talents has been past to Nada who uses the inspiration around her bushland studio overlooking Pittwater in her seascapes, harbour views and still lives. Her unique use of  thick brushes, oil paints and a palette knife. The palette knife creates a “fresh” quality and is perfect for painting wet over wet without the colours becoming muddy.

The colour and excitement in Nada’s work reveals her love of the area in which she lives and the beauty found within the bush, marine life and on the beach. Her still lives create a vibrant and energetic appearance.

Herman Pekel experimented for a time with abstract expressionism, but he is now well known for his oils and watercolours. Herman is an artist of energy and enthusiasm. He is able to see a painting in almost any subject matter and is capable of producing award winning work in oil, watercolour or gouache.

He produces paintings of strong design and powerful impact – brushstrokes are vibrant and visible. The scope of Herman’s work ranges from dynamic industrial scenery to soft, draped interiors and broad Australian landscapes. These are painted in both oil and watercolour demonstrating his unique creatively and contemporary impressionism.

Chris Pekel taught by his parents has taken his father’s contemporary impressionism and developed his own modern impressionist works. These alternate between loose, almost abstract forms and realist mages, many painted plein-aire around his home, Sydney. Chris uses a mix of oils, acrylics and varnish glazes to create warm darks and bright colours. His works are characterised by large brush strokes and strong contrasts.

Utopia is an Aboriginal homeland formed in November 1978 by the amalgamation of the former Utopia pastoral lease with a tract of unalienated land to its north. It covers an area of 3,500 square kilometres, transected by the Sandover River, and lies on a traditional boundary of the Alyawarra and Anmatjirra people, the two language groups which predominate there today. The name is probably a corruption of Uturupa, which means ‘big sand hill’, a region in the north west extremity of the area. 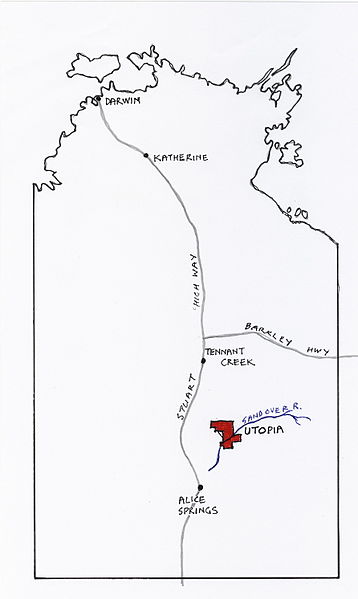 It has a number of unique elements. It is one of a minority of communities created by autonomous activism in the early phase of the land rights movement. It was neither a former mission, nor a government settlement, but was successfully claimed by indigenous people who had never been fully dispossessed. Its people have expressly repudiated any municipal establishment, and instead live in a score of outstations or clan sites, each with a traditional claim to the place.

It was in the late 1980’s that Aboriginal people of Utopia started to put acrylic paint on canvas. This followed a very successful decade of working with batik, several years after the Papunya art movement began which put Utopia on the map, so to speak. The women had been rounded up to try their hand at batik, which they fell in love with (Lindsay Bird was the only male artist to participate). When painting eventually reached the people of Utopia, with its quick drying and no mess properties batik was a thing of the past. Generally Utopia artists were initially quite formal in their painting techniques. So, most work was done with the use of fairly large dot or linear work.

The forms from which the acrylic paintings take their inspiration include: ground designs, rock paintings, ceremonial and body paintings, along with flora and fauna

It was quite traditional in depiction so much that the symbols or style clearly showed a cultural story whether in regard to ancestral Dreamings or Bush Tucker.

It didn’t take long before many artists became bolder in style, colour and flair. This is what the art of Utopia is renowned for today. Utopia women in particular are known as the leaders in female aboriginal art as well as their colourful contemporary appeal. This has resulted in a deeper and broader interest in aboriginal art throughout Australia and internationally.

A number of individual artists started producing art that was so different to the normal. The unique colour sense, creativity and genius caught everyone by surprise. This is how Utopia art emerged. So too had artists such as Emily Kame Kngwarreye, Gloria Petyarre, Kathleen Petyarre and Ada Bird.

This art continued to change with the introduction of more colour, more storylines, and more abstract work, but it always has an underlying cultural meaning. Other artists such as Barbara Weir, Greeny Purvis, Nancy Kunoth, Angelina Pwerle, and Violet Petyarre began to be noticed and joined the others as household names.

Today the art of Utopia continues to astound. There are well over 250 professional artists in the region, all producing work that has great significance in one way or another. Whether it be traditional or abstract art, or in the form of dots, lines or a mixture of these applications, there is always a sense of pride and achievement in their art.